Sur La Table, Uniqlo, RealReal.com and the other fastest-growing merchants ranked in the 2014 Top 500 Guide deployed new features and listened to customers to put e-commerce on a faster track.

“It’s not one big thing we are doing to generate more e-commerce sales but just the constant stream of small things we keep doing to make improvements,” Ertell says. In the last year Sur La Table has worked to improve SurLaTable.com by implementing a new site search engine from Oracle Corp. “With better site search the whole e-commerce shopping experience is now just more intuitive and personalized for each shopper,” Ertell says.

Sur La Table also implemented a new social media tool on SurLaTable.com called “My Collections” that lets customers shop for their favorite cooking or kitchen item, see similar items other shoppers have purchased, create a collection based on the results, and then share the collection with family and friends on Facebook and Pinterest. “We wanted to bring some aspects of social media to the site because we can use this as a tool to generate transactions,” Ertell says.

2013 was less than stellar for many Top 500 manufacturers

Many of the fastest-growing merchants in the 2014 edition of the Top 500 Guide cited improved features and functions as the reason why their online sales are growing at a brisk pace. The fastest-growing web merchant overall and among retail chains was Uniqlo, which increased web sales 341.3% to an Internet Retailer-estimated $22.06 million in 2013. Uniqlo, a chain owned by Japan-based Fast Retailing that only began selling online in the United States in 2012, credits its growth to faster search, one-click shopping on many product pages and a responsive design that enables Uniqlo to use one code base and one set of web content to render a site that fits the size of any screen. 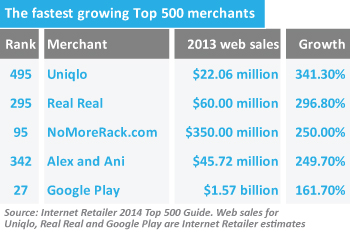 RealReal.com, a deep discounter of used and consigned luxury apparel and accessories, stimulated growth with an updated mobile app that automatically puts a shopper on a wait list for similar items if a product she wants is sold out, says founder and CEO Julie Wainwright. At the fastest-growing Top 500 consumer brand manufacturer, jewelry maker Alex and Ani, the key to sharply higher web sales was marketing via social media and better use of customer data, says Ryan Bonifacino, Alex and Ani vice president of strategy. The company grew online sales 249.7% to $45.7 million in 2013

At Sur La Table it’s a mix of new programs such as a ship-from-store program that will launch sometime in 2014 and more attention to mobile commerce that will drive continued growth in web sales, Ertell says. In 2013 about 40% of all traffic to SurLaTable.com came from a mobile devices and mobile commerce accounted for more than 10% of all sales, Ertell says. “We just want to keep on getting better,” he says.

For more information on how to order the 2014 edition of The Top 500 Guide click here.