US e-commerce website Fab.com said on Wednesday it had raised investment of $150 million from companies including Chinese Internet giant Tencent Holdings Ltd.

Analysts said Tencent may help Fab enter the Chinese online market, which is expected to record nearly 2 trillion yuan ($326 billion) in sales by the end of this year.

Shenzhen-based Tencent said it will make a "minority investment" in the US company, but has not disclosed the value of its investment.

Tencent will have a seat in Fab's boardroom after the deal is done.

Fab could take on as much as $100 million in further investment over the following months, company CEO Jason Goldberg told The Wall Street Journal.

The funds will be used to build its online stores, develop exclusive products and expand its international footprint, he said. 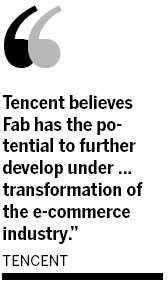 "Fab is one of the leading online design retailers in the world. Tencent believes Fab has the potential to further develop under the wave of the global, social and mobile transformation of the e-commerce industry," Tencent said via e-mail.

Founded in June 2011, Fab recorded revenue of $120 million last year. That figure is likely to reach $250 million by the end of this year, tech news website TNW said.

Tencent said its social strength and technical capabilities will help bring Fab to Internet users around the world.

Fab's other investors include Japanese retail conglomerate Itochu Corp, an indication the company may be looking toward Asian markets.

Tencent has been vigorously building up its e-commerce segments to challenge Alibaba's dominance. Its most recent attempt is authorizing payments via WeChat, its popular smartphone application.

Statistics from the China Internet Network Information Center revealed that China had 242 million online shoppers by the end of 2012 - or more than 40 percent of the country's entire Internet population.