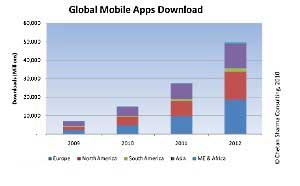 The global mobile applications market is forecast to reach $17.5 billion by 2012 and surpass the market for CDs, which is projected to reach $13.8 billion*during the same period, according to GetJar. 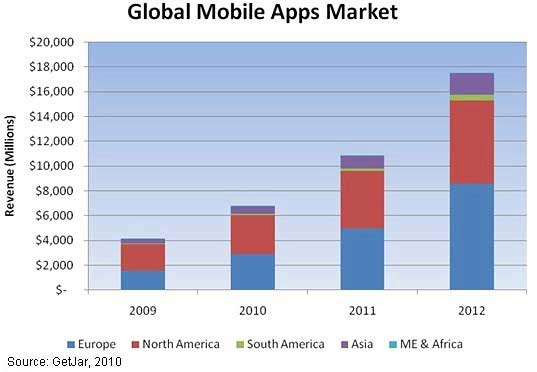 Mobile apps downloads across all types of handsets are projected to increase from over 7 billion downloads in 2009 to almost 50 billion in 2012, up 92% year over year, the study forecasts. 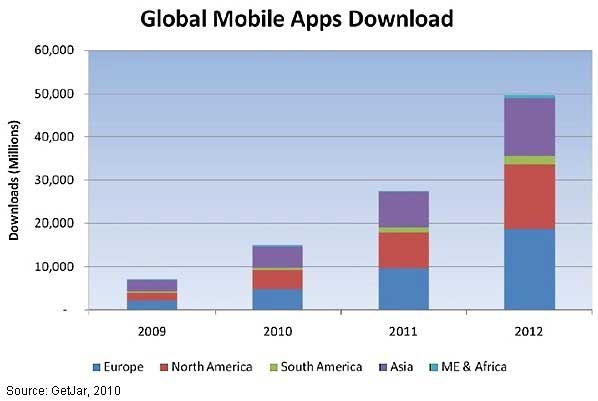 Below, additional findings from the GetJar study:

Off-deck (outside the carrier deck) paid-for apps will account for largest portion of revenue increases-almost 50% of all applications sales in 2010. In 2009, by comparison, on-deck apps available from mobile operators accounted for over 60% of all apps revenue; that proportion will fall significantly to just under 23% by 2012.

Advertising-based revenue models are gaining traction: Advertising contributed almost 12% of the overall apps revenue in 2009. However, that share is expected to more than double to over 28% by 2012-taking into account the high proportion of prepay users in developing markets.

The average selling price of applications was approximately $1.90 in 2009. That level is projected to fall 29% over the next three years, even as advertising revenue derived from apps is likely to stay relatively flat.

Overall, feature phones accounted for 90% of handsets in use worldwide in 2009, while smartphones and data cards accounted for the remaining 10% of the market. In North America, however, uptake of smart phones was much higher (over 20%) than other regions (3% in Middle East/Africa).

The line between powerful feature phones and smartphones is blurring as consumers demand powerful yet cost effective devices, effectively expanding the apps revenue opportunity across a much broader range of handsets, GetJar said.

*According to the world music trade body IFPI (International Federation of the Phonographic Industry), April 2009.

About the data: Findings are from a study conducted by Chetan Sharma Consulting on behalf of apps store GetJar. The study focused on the mobile applications market across five major regions: North America, Europe, South America, Asia, and the Middle East and Africa. To create a framework for analysis, Chetan Sharma Consulting built a model that took into account how the overall apps consumption is evolving across various dimensions: on-deck (offered on carrier deck), offdeck (outside the carrier deck or offering though they still might play a role like in billing or marketing), smartphones, feature phones, paid, free, advertising-based, and virtual-goods-based.