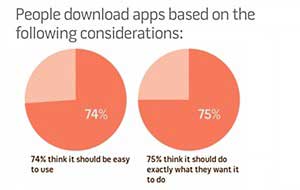 Nearly four in ten mobile users (38%) say they're dissatisfied with most of the apps currently available from their favorite brands, and 69% agree that if a brand's mobile app isn't useful or easy to use, it contributes to a negative perception of the brand, according to a survey from EffectiiveUI.

Mobile is a key part of the brand experience for many: 76% of mobile app users say brands should have mobile apps to make shopping or interacting with them easier.

Though the apps market is relatively new, user expectations are high: 73% of mobile app users expect a company's mobile app to be easier to use than its website.

Echoing the experimental nature of the market, most users who download and use apps do so based on recommendations and good user experience, rather than the brand that released it. Only 18% of mobile app users consider the brand name when deciding whether to download an app.

Below, other findings from the study by Harris Interactive and EffectiveUI.

What do users want from branded mobile apps? Usability and experience are more important than brand name alone: 74% of mobile app users want ease-of-use and 75% want apps to perform as expected.

When things go bad with apps, people spread the word: 32% of app users say they have told others about a bad experience with a mobile app. Some 13% have avoided downloading applications from a brand because of a previous bad experience with another app offered by that brand.

By contrast, 66% of app users have downloaded an app based on a review or recommendation, and 57% have recommended an app because of a positive experience.

One-third (33.1%) of US wireless subscribers downloaded a mobile app in the third quarter of 2010, up 2.5 percentage points from 30.6% in the prior three months, according to separate research from comScore MobileLens. That level is nearly equal to the 35.1% who browsed the mobile Web during the same period. 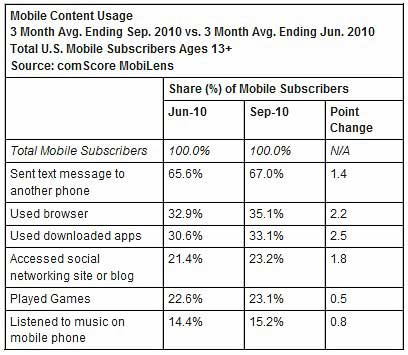 Nearly one-quarter of US adults (24%) say they use mobile apps, though 35% say they have apps on their phones, according to Pew Research.

Many adults who have apps on their phones, particularly older adults, do not use them, and 11% of cell owners are not sure if their phone is equipped with apps.

Among cell phone owners, 29% have downloaded apps to their phone and 13% have paid to download apps.

About the data: The survey of 781 online adults who download and use mobile apps was conducted in October 2010 by Harris Interactive. Pew data is based on a telephone and Internet survey of 2,252 US adults age 18 and older, conducted by Princeton Survey Research International from April 29 to May 30, 2010.