From what I was told, the Chinese tax department classifies companies as below:


Similarly, smart importers who deal with more than 10 Chinese suppliers should do the same: 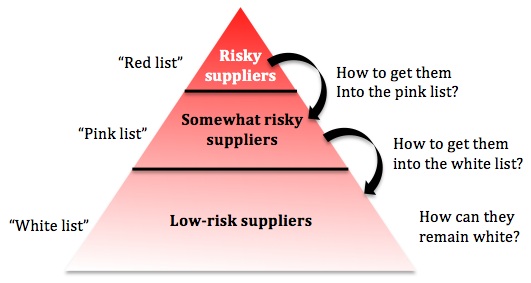 Most importers have a few good suppliers that are given most of the production. Quality is usually not a problem.

And therefore, systematic quality inspections (before every shipment) are overkill. It is possible to save money by announcing at the last minute to the supplier that certain references don’t need to be checked (that’s what I call “surprise skip-lot QC”).

Now, a word of caution. If you are dealing with pharmaceuticals or car parts, you don’t have a white list. But most importers of consumer goods will recognize that they do have suppliers that consistently produce at, or above, the required quality level.

The suppliers on this list make mistakes. They are disorganized and each one of their production batches needs to be checked, without exception.

One final random inspection is usually enough. When they start making a new product, an inspection during production might be a very good idea. But that’s about all the QC you need.

Your new and untested suppliers come here. If you haven’t been able to negotiate a very low quantity for a trial order, you need to watch them very, very closely.

Your unreliable suppliers are also in this category. You know, the really cheap factory you need for some of your projects. Or the only supplier you found for that cool product that sells like hot cakes…

What does “close followup” mean?
* Setting up a product specification checklist, translating it, and explaining it to the factory;
* Accompanying the factory technicians during pre-production sampling, and during production launch;
* Checking every sensitive production step (or even stationing an inspector on site for several weeks).

Does it cost more (overall) to apply what I wrote above?

It should actually cost much less in the long run, if you can reduce the proportions of red-listed and pink-listed suppliers!

The key is to discharge the white-listed factories, by inspecting them only once every 2-5 shipments. If you schedule inspections randomly, you can keep pressure on them.

What most midsize and large importers do wrong

Most importers, once they reach a certain size, set up a quality control policy. This QC policy usually states that every order must be checked before shipment.

In effect, they treat all their suppliers like they are on the pink list — or they distinguish between a pink and a white list. But they seldom have a special program for their least reliable suppliers.

Consequences:
* White-listed manufacturers are tired of controls that are too frequent. The buyer wastes money.
* Red-listed factories are not helped/monitored along the way as they should. The buyer finds out about problems way too late, and gets frustrated.

Limits of this approach

What I advise here is not applicable in certain cases:
* The importer places one-shot orders with many separate suppliers (example: promo items buyers).
* The importer works with very few suppliers, and can intuitively help&control them appropriately.
* The red-listed suppliers are too big, compared with the buyer’s orders, to care. They will not make any effort for a small customer.

About the author: Renaud Anjoran has  been involved in the China sourcing&manufacturing fields since 2005. He helps importers with QA services, and manufacturers with improvement  projects. He blogs at www.qualityinspection.org